If You Sit Too Close You'll Ruin Your Eyes

It's 2002 and I'm sitting in my bedroom in my childhood home, the glow of my computer, originally the family computer bought in 1999 and plastered with "Y2K Compliant!" stickers all over it but now reclaimed and repurposed into my own personal machine for watching & making shitty flash animations and chatting on AIM deep into the night and playing Starcraft with an impossibly high ping but not caring; this computer illuminates my face in soft blue death as I toil over the perfect words to express my love for a girl who I'll never see again after the year 2006, despite all of us living in this new bright exciting digital world that's really just a shitty algorithmic cluster fuck of corporate interests and control of your data. Hopefully that won't turn out to be anything bad, right? 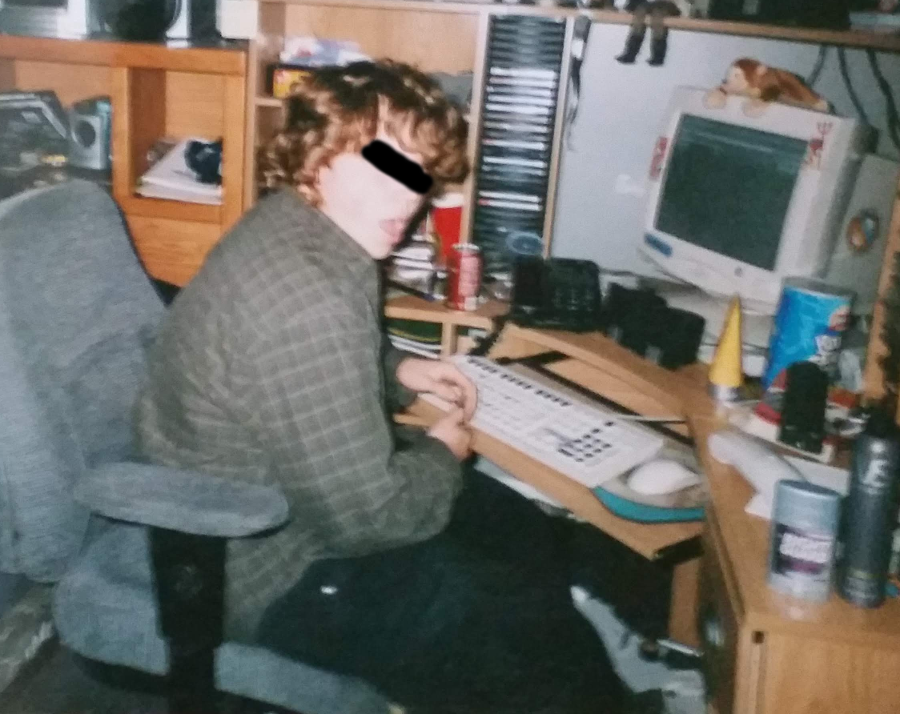 The author some years ago, on his old computer. This image makes me physically uncomfortable.

I like an online world that doesn't exist anymore. Well, it does, but it's hidden inside of this giant shitty world that now exists, that has taken over and expanded to be the dominant hunk of organic matter, an inoperable tumor that you just have to gut out until it eventually spreads somewhere it shouldn't and you collapse inside the bathroom one day and hit your head on the corner of the sink counter. Rest in peace, shitty inherent spyware version of the internet. The internet of my liking is of course the internet from when I was a kid. I think that's the kind of _____ that everyone likes, the version they grew up with and "found" on their own.

So I prefer to surf Newgrounds all day long and literally no other website, to have some janky AOL email address that just doesn't really get any emails sent to it because email doesn't mean anything, to have a buddy list on AIM that has like 500 people in it and I always put up some stupid away message about what I'm doing for the day/night when I'm away from my computer and is also full of dumb inside jokes to friends, ie, "baseball practice-->movies to see star wars--> who knows. lol acme for sodas right alex?" and of course I miss playing Diablo 2: Lord of Destruction with my friends and we somehow perfectly communicated what we were doing solely through in-game chat which just seems unfathomably messy in present day.

I'm lying of course. I miss these experiences, but I also don't. Like I said, this online world exists contained entirely within the new online world. I could go on Newgrounds or play Diablo 2 or ignore my email or chat with friends online, albeit not on AIM, but on something enough like it that it fills that void. I could do these things today, without any real extra effort needed. But I don't. The online world changed and I changed with it. I don't have the singular focus any longer to go on Newgrounds and watch hundreds of flash videos with no relent at all. I can't sit and play a video game for longer than thirty minutes without getting antsy. I don't really, ya know, have friends anymore to fill my night with conversations of differing importance and interest. All my important updates and bills and etc go to my email account now.

Change is inevitable, a certainty. But that doesn't always mean the change is good. Just that it's coming, whether you like it or not.

I used to pair my love for the computer and all things from the Web 1.0 with a love of being outdoors, namely skateboarding on homemade ramps and rails and obstacles in my driveway and trying so very hard to get good at something that was inherently not part of my essence as a being. I was not a natural skateboarder but I tried and tried and tried until I got just mediocre at it. I would throw myself as fast as I could at a 4x4 that was waxed on the top side and had little stabilizer feet I screwed into it to try to learn boardslides. I'd do this in between writing paragraphs of essays I had to write, or between weirdo animations I'd watch and fawn over; I'd finish up a pargraph or a movie and then full-sprint run from the computer, out through the front door, grab my board off the front porch and hit the asphalt. It wasn't uncommon for me to take all day and night on a weekend to get a five page paper done simply because I spent a few hours of it trying to land kickflips off a ramp or something. I wanted to be on the computer but I also wanted to be outside pushing it. So I furiously did both things as much as I could.

I'd rather be doing this than just about anything, except for doing this.

This clear and concise division of my two biggest and most important worlds, the outside and the computer, was of course entirely destroyed when social media started obliterating the normal websites and usage of the internet, and then the iPhone and the Droid made it so you could take this new version of the internet with you always and forever. A two-pronged attack, slow but unstoppable. Unimportant, wholly, but still it leaves me with a listless feeling in my day to day life. I was never into the whole "internet on my phone" thing, even when I had a fancy new phone that could do that thing. I still preferred a computer for my internet things, and the phone was for texting and calls.

But the creep is hard to contain. I found myself putting up with using my phone for things I normally used my computer for more and more. Especially as my peers started to accept it, I begrudgingly accepted it as well. At a certain point my laptop finally died out on me and I had no need or desire to replace it. I had a phone, which was fine. I could do whatever I had to on that.

It's hard to really explain it perfectly. This is just another essay of "old man hates phone and internet bad" or whatever but I really do feel like we kind of lost a certain tiny little magic by always having them on us, at least smartphones. In the small window of time when I had a phone but it wasn't smart, I still felt like there was this great divide between the power and infinity of the internet and running around parks and through people's backyards with my friends. "Text Mark, he said he might hang with us later" and that was it. Text your friend, maybe they respond, maybe they don't, but that's just how it is. There was no appeal to the phone other than as tool to talk to your friends, usually as the easiest way to organize.

But now the appeal is the phone. You've got everything, ever, in your hand or pocket, at all times, forever. I don't blame anyone I know when they're looking at their phone while they talk to me face to face. That weird short story they're reading or (more likely) that Instagram post of that amazing looking sunset is way more interesting than me talking about how I don't like going to used book sales much anymore or wondering why the coffee at this shop doesn't taste as good today. You could literally just hit an app and start watching The Office at any moment. I can't blame you if you do, friendo. 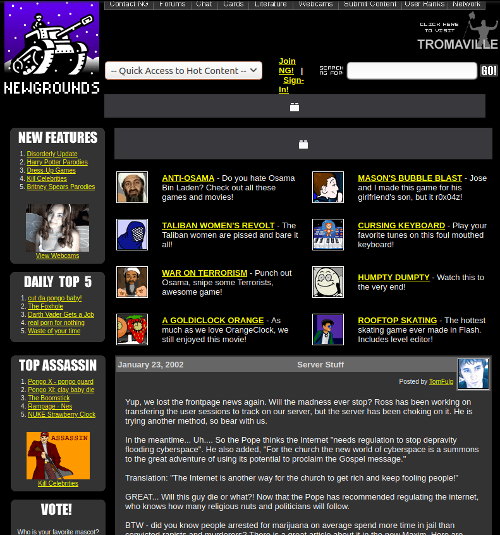 For the past few weeks, and in a more lazy way, past few years, I've been trying to figure out how to disconnect from the internet in its current iteration and get to a more "go skateboard as hard as you can for 10 minutes and then go on the computer for 10 minutes and repeat that until it's dark" type of format. I haven't figured it out but I think I'm getting closer.

I don't skateboard anymore. I have a board still, it sits in my car, just in case I pass something that is such an amazing skate spot that I pull the car over and say to myself, "okay, I'll never be here again, if I don't at least try to do something here, I'll never forgive myself." But so far...that hasn't happened. I'm usually rushing off to work or to take care of errands or to some type of hang out I generally don't want to go to, I'm not taking the time to look at the curbs and ledges and stairs and think about throwing myself into harm's way with a piece of wood under my feet.

But now, I run. I'm not a natural runner, never "ran" as a sport until just the past few years. But I try and try and try, I get out there and get miles on my legs and keep pushing myself to go further or faster or both and to explore the towns around me for fun places to run by while I'm cursing at myself under my shortened-breath and thinking "okay just four more miles and them I'm done and I can eat a bunch of chips." So maybe I need to just start running for 10 minutes and then going on my computer for 10 minutes watching shitty flash animations and visiting weird and interesting websites on Neocities and who knows maybe I'll even play Diablo 2 again (def not gonna happen) and I will conquer the internet.

Or maybe it's not conquering the internet as much as it's uncovering the old internet hidden within the current internet, an imperfect squiggle of a circle-like shape of weird sites hodge-podged together by the fact that people are making things out of love, not profit. Facebook might have a more advanced platform in literally every single aspect than Mark Crable's site, but Mark is actually cool. Like a cool uncle who isn't really your uncle, he was just some neighborhood kid that your mom and real uncles grew up with, and they're pretty sure he might've killed the family dog all them years back, but he also punched your grandpa that one time when Gramps had too much to drink on the 4th of July and everyone thought he was gonna hit grandma because they argued about that thing that happened on their honeymoon. Yeah, that's Mark Crable, exactly. And that dude has a website.

This post was brought to you by the vegan pho I just ordered and am about to leave to go pick up. Go outside more, Mike. You idiot.