The year is 2005 and I'm watching cable TV in my room on any given weeknight while chatting with my friends on AIM. I'm not sure what I'm watching, probably SportsCenter or MTV's Real World/Road Rules Challenge or Office Space on TBS, or something. Times were different back then. A commercial pops up that would air relentlessly over the next few months; it's some kind of tv show about college kids, and the end of the commercial plugs a website (very rare for the time): oddsagainst7even.com. Turns out this show is a web-series sponsored by Target. You can only view it on the website. This wasn't unheard of, but as a large-scale marketing campaign for a big box store, this was entirely unique.

this was a banner ad at the bottom of Target's "Red Room" site, which was their online music storefront that was all about hip and cool shit. the entire site frontpage was a flash file, ahhhh the old internet. i never saw this when it was live, i just pulled it from the wayback machine this week.

Blah blah blah, the truly important thing here is the song that is used for the commercial. This song is an absolute banger. I can tell that it's Bloc Party because I ripped my sister's copy of Silent Alarm after she bought it and it's one of the only 10 or 20 CD's that I own and as a result, I listen to it over and over again (times were different back then.) I had never heard this song by them before though, and all I can understand is the final lyrics used for the commercial spot, "...if you promise to paint me as a work of art."

...Nowadays if you had just those few lyrics to search, you'd find the song no problem with one search. 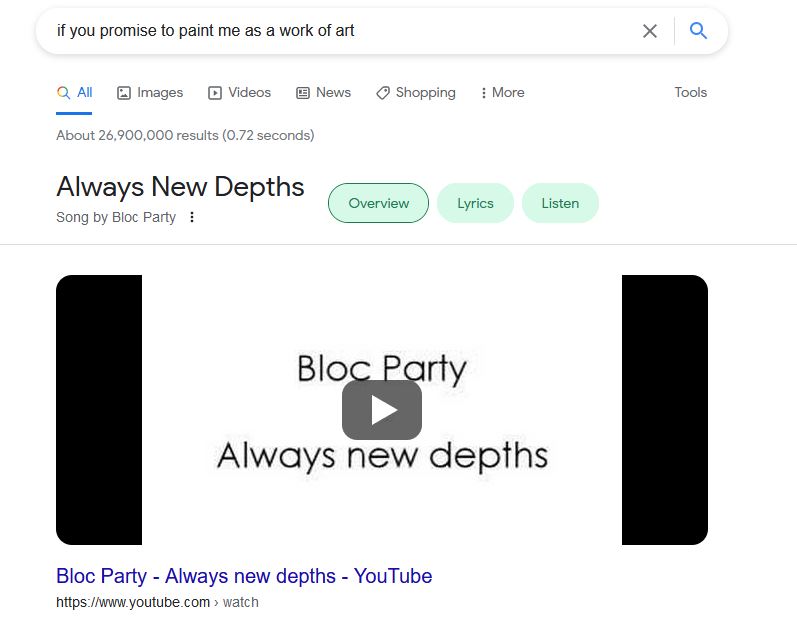 But the internet in 2005 was way, way less indexed and it was nearly impossible to find things as easily as we can today. My internet was too slow and my hand-me-down PC was too old to really load up the oddsagainst7even website properly, so I couldn't really experience the site as it was designed, and I couldn't watch the webseries itself. I'd see this commercial on TV a dozen times per day though, so I had this 30 second snippet of the song bouncing around my head, taunting me with beautiful unknowable mystery.

After a few deep, deep searches I think I stumbled on a message board where people would identify songs used in commercials, and lo and behold I found the name of the song: Always New Depths. 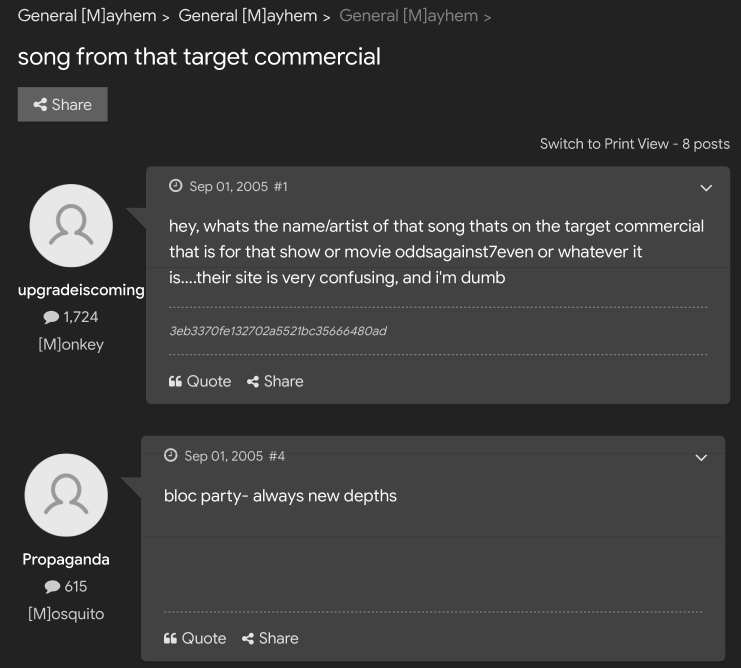 i'm not sure if this is the exact site i found that gave me the name, but this is a 17-year-old song I.D. nonetheless

Great, I know the band's name, and I know the song title, now just to get a copy of the song. This was harder than it seems.

Where would you even find music? Spotify didn't exist yet, Pandora did but you couldn't just find a song you liked on it when it launched. Napster was long dead by this point. Youtube technically existed, but not in a meaningful or useful way for finding music. Lots of shady-at-best sites overseas would let you download songs for one or two cents per song, but I never messed with those sites. Most of us used filesharing programs to get all our music. I used Kazaa and Limewire primarily, but would sometimes get lucky with a harder to find file on BearShare. Yo-ho-ho, the seas were harder to navigate and full of malicious spyware, but it was fun in a novel way. Unfortunately, none of the good people who shared their music libraries on these apps had Always New Depths for download.

Trying to find out more info about the song, go to Wikipedia, right? The Wikipedia page for Bloc Party in October 2005 (roughly when I found out the name of the song) just...didn't have info.

I mean, it had info, sure. It even had a list of Single releases which included "Helicopter," which is where Always New Depths was actually released, but there was no link for more info about "Helicopter" and the entire article was more hearsay and rumor than hard fact. This is another part of the internet that is taken for granted now; Wikipedia was extremely hit or miss back then and both the quantity and quality of information within articles was nowhere near what we expect from an article today.

So my life went on. This song was just like a small little side-quest in the boring Skyrim (or Morrowind, which is what I was playing back then) main questline that was my life. I was 17 and my life was arguably the most exciting it was and would ever be; I was skateboarding with my friends a few nights a week, hanging out with a bigger group of friends the other nights, hanging out awkwardly with crushes, worrying about the future, playing video games, going to parties, going to shows, playing a bunch of weird Starcraft use map settings games, and a million other little things. The majority of my time was spent with people, whether we were doing exciting things or just watching reruns of South Park.

I went to college, things changed for me. I became more introverted, more insular. I couldn't really relate with a lot of the people on my floor. I also tore my MCL the last month of high school and it took well over a year to heal, so I got kinda fat and couldn't skate anymore. Man, that sucked. Facebook was brand new at my school that year, and I had a new laptop that could play decent games. I became this sort of proto-terminally-online person. I got access to the school servers for DC++, a network-based file sharing system. I met a bunch of people on there, and would spend the next four years weaving in and out of their lives in various levels of friendship. 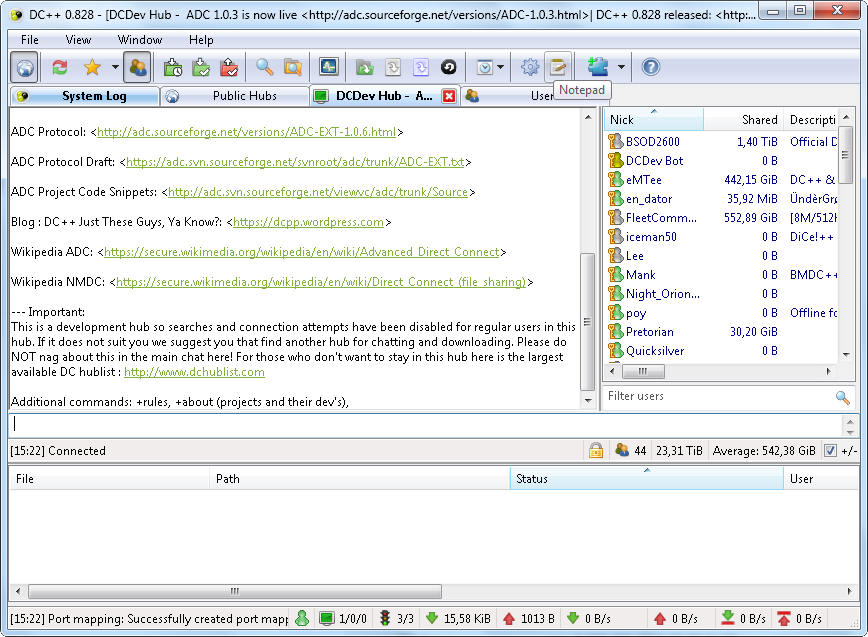 i think i had it in dark mode, but the majority of hours of my college social life existed in a dc++ chatroom.

As senior year was finishing up and my anxiety of not having any job prospects whatsoever continued to build every single day, some part of my brain was like "hey you should download all the tv, movies, and music your external harddrive can fit since you won't have access to this once you graduate." So I started making lists of things to download. A few shows that I wanted for replay purposes (King of The Hill, Futurama, and whatever had aired by that point of The Office, essentially) and then I started listing directors I liked and looking up movies by them I hadn't seen. I started doing a similar list with bands I liked, trying to create a list of albums I wanted to download.

And then the name "Bloc Party" surged through the brain puddle in my head, and immediately after that, Always New Depths. I searched in DC++ for "Bloc Party" and parsed through the results. There it was, waiting for me plainly in the list of results. I download it, and a few minutes later it's ready. After nearly five years, I can listen to this song. Here we go:

Oh my god, it's the banger I always imagined it'd be.

It just starts. Press play and it's already moving. The intro until the full instruments come in is 12 seconds, but it's already got tempo and it's zooming through your ears. Kele starts singing and we're off to the races, folks. This is that beautiful indie sound that emerged once the bleak landscape of emo and screamo finally started to wane.

This is fast and sweeping and Kele's voice is smooth and elegant while still having this raw energy that builds and builds. The first verse lays it out and then we hit the chorus once before going to another verse, but then when we get back to the chorus the second time, it's longer, new lyrics draw it out, until finally we get to the end of it and the entire song shifts, the energy has built up to its max, it has nowhere to go and we repeat "as a work of art" and "you're my work of art" with that energy left hanging in the air, the instruments stripped down to just keep the pace.

Then the drums fill and cascade and we finally get the release, "Always New Deeeeeepptthhhsssss" and we hit that over and over with all the instruments firing off, it's here til forever, this moment is everything it should be and we keep getting it. It's that conscious thought to take an extra minute to look around at the beauty of the world around you and really soak it in, always new depths, and eventually we slow fade everything as a sort of droney synth noise comes in and takes over for the extended outro. This is a work of art, it's pure and joyous and energetic and it makes you want to move your body from the very first second it starts.

Always New Depths is in my running playlist and it should be in yours.